The principal UK Proof Act passed in 1868 (download), was supplemented by further Acts in 1950 and 1978. The 1978 Act enabling the United Kingdom to accede to the Permanent International Commission for the Proof of Small Arms (CIP).

The Proof Acts apply to all small arms, whether of present use or future invention (with the exception of some military arms made for the use of H.M. Forces, although in the modern era CIP proof is now often requested as part of H.M. Forces protocols). Air guns are exempt from the Proof Act.

The Proof Acts lay down that no small arm may be sold, exchanged or exported, exposed or kept for sale or exchange or pawned, unless and until it has been fully proven and duly marked. The maximum penalty is £5,000 for each offence. Higher penalties where, for instance, the sale of a number of guns constitutes one offence, can apply.

Arms previously proven and bearing apparently valid proof marks are deemed out of proof if any pressure bearing component of the small arm has been materially weakened in substance or strength. There are defined internal bore size enlargement increments allowed for shotgun barrels, these can be found in the relevant Rules of Proof.

The offence in dealing in unproved arms is committed by the seller, not by an unwitting purchaser.

The Rules of Proof

The Rules of Proof are a schedule of the Proof Acts, along with CIP Decisions they makeup the working instructions for the British Proof Authority. The rules specify the technical requirements for proof and reproof, including the marks to be impressed on guns which pass, together with such details as bore and chamber dimensions of shotguns.

The current Rules of Proof, those of 2006 (download), were approved by the Secretary of State to come into force on the 1st August, 2006. Other Rules of Proof of particular note were those of 1925, 1954. The Proof House can provide copies of the Several Acts and Rules of Proof for a small fee.

The Commission internationale permanente pour l'épreuve des armes à feu portatives (The Permanent International Commission for the Proof of Small Arms) or C.I.P. is an International Standards Organisation which lays down Rules and Regulations for the proof of weapons and their ammunition. This ensures that Member States mutually recogise each others proof marks. 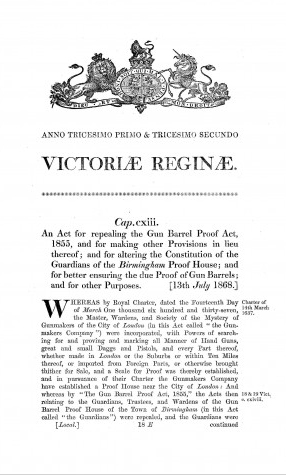